During the Scheepjes 'The Last Dance on The Beach' CAL - in memory of Wink - some people found their stitches 'tilted' to one side when they made the Zipper Join method. A lovely girl called Margaret Evans came up with an innovative way to avoid this 'tilting'. She described it best, so I will share her words and infographic below, but before I do, I would also like to let you all know that Esther who is mentioned by Margaret has a lovely blog where you can find a lot more information regarding The Last Dance On The Beach CAL and I will link her site at the end of this blog post. Now then, here is Margaret's 'Anti-Tilt' Zipper Joining 'Tweak':

"A few people have asked if I would mind putting up some photos of how I tweaked my join. Here they are. The steps are as follows:
1) Watch Esther's video. She is amazing and the zipper join is such a cool, classy join. So many people followed her steps and got perfect flat joins. If that's you - fantastic. Move along, you don't need to read further 😄.
However, if like me, following it perfectly still left your join with a little 'tilt' which showed some of the colour underneath AND you are unhappy with that, then read on 😊
A. Same as Esther - Make sure your working yarn is behind your work
B. Different to Esther. In the 1st square instead of putting your hook in the inner loop from the front to the back, do it the other way around. Put your hook from the back to the front (so your hook pokes up through the centre of the stitch)
C. Same as Esther - put your hook through the inner loop of the 2nd square from front to back.
D. Same as Esther - yarn over and pull through the 3 loops on your hook in a slip stitch.
For me, this resulted in a perfectly flat join with no tilt and no visible colour underneath. I personally was unhappy with my original join and for some reason I thought I would try this and it worked!! Surprised the heck out of me but I am so happy as this now looks how I imagined it would.
I am no designer, I am just a CAL participant who is happy to share. As has been explained loads of times, we all have different tensions and hold our hooks differently so this can sometimes affect the result. No-one has to do this but it might be handy to know. I appreciate all the work the designers have put into this and do not wish to take away from that at all <3. I am on my horizontal joins now. Have to get my focus on so I am done before Wednesday's border pattern is released. Happy hooking all x" - Margaret Evans 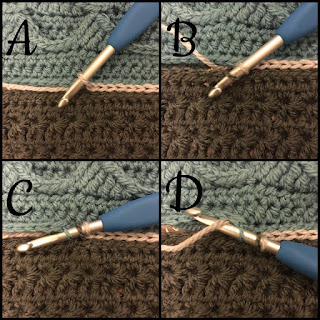 Although she says she is not a crochet designer, I think she should be, don't you agree?! Thank you Margaret, you really helped me and so many others!
Linked below is Esther's Blog:
https://itsallinanutshell.com/2016/07/13/joining-last-dance-on-the-beach-squares/
Posted by Unknown at 11:06